I’ve been collecting Funko Pops since 2013 (I’ve talked about this on my blog Anakin and His Angel before). My very first figure was Darth Vader which my mom purchased for me. I didn’t know much about the Funko brand at the time but I was about to. I attended the D23 Convention in Anaheim and I was exposed to many large walls of Funko Pops from several exhibitors that were set up there. I almost couldn’t handle the cuteness and the myriad of characters there were to choose from, though I did go home with a handful!

While I find myself mostly collecting figures from the never-ending Star Wars line, I do pick up other figures as well, including some from Disney, Marvel, and DC. 98% of the time I am an in-box collector. I appreciate the overall aesthetic and the fact that they are much easier to display. There are some occasions where I’ve removed a figure from the box due to the box not being in mint-condition or because one of the figures was staring at me with big round eyes screaming to come out. You can bet one of those was a Porg!

I thought it would be fun to challenge myself and choose five of my favorite Star Wars Funko Pops that I own. It took a lot of thought to be able to do this considering how many I have, but I think my list makes a lot of sense because it just feels like me.

This is my absolute favorite Star Wars Funko Pop that I own! It may seem shocking to some of you but it holds a lot of meaning for me. This figure was included in the very first Official Star Wars subscription box by Funko just before The Force Awakens was released. Prior to Disney acquiring Lucasfilm I loved Star Wars as much as I do now, but there wasn’t much happening as far as new content went. When I heard the announcement about there being more movies made, I didn’t like the idea. But the release of the first teaser trailer changed my mind and since then, we’ve had an endless amount of new content to enjoy. Having a collectible that reminds me of the happiness that this movie brought me, along with the fact that it’s the prettiest Star Wars Funko Pop there is, makes it hold the #1 spot on my list!

I am quite lucky to have found the Queen Amidala Funko Pop when I did because she is difficult to acquire unless you’re willing to pay $100+. I remember knowing of her existence and spotting her at Star Wars Celebration Anaheim 2015 for $10. I went through many different figures until I found the one with the best paint job while the owner watched me (probably annoyed that I was searching through so many). She’s beautifully detailed and one of my favorite leading ladies of Star Wars. Plus, it’s nice to own a Padme figure that isn’t dressed in the Geonosis outfit!

This Rey with the X-Wing pilot helmet and doll was one Funko Pop I knew I HAD to have! I remember pre-ordering her from Gamestop because I didn’t want to miss out on getting her. I loved this scene in The Force Awakens so much because even though Rey faced rough circumstances in her life, she could just sit and be content for a moment and enjoy the little things. The accessories on this Funko Pop are super cute and it’s a figure I could never give up.

Darth Vader is my favorite character in the Star Wars Universe. I own a few different versions of Vader in Funko Pop form and this one is my favorite. The details are fantastic and I love that it represents one of the most important scenes in any Star Wars film. This moment in Return of the Jedi is a great reminder that no matter what you’ve done, you can change, and it’s never too late to make the right decision.

Last, but by no means least on my list is the Hot Topic Exclusive Ahsoka Tano Funko Pop from Star Wars Rebels. It seemed like it was forever that my husband and I talked about the fact that there needed to be an Ahsoka Funko Pop until they finally made one. When this figure was announced, we were ecstatic! In fact, this figure and every other version of Ahsoka that has been released, we have purchased two of. Why? We wanted one to open and one to leave inside the box. Ahsoka is our second favorite character, so it just made sense to do this. Everything about this Funko Pop is stunning!

Oh, and guess what? I’m giving away a Chrome Captain Phasma with Gemr! If you want to win it for your collection, click the link below and join the Gemr Star Wars Club!

Gimme that Chrome Dome! I want to Enter!

Written by Jenmarie
Jenmarie is a thirty-something bubbly geek girl who enjoys frequent trips to Disneyland and loves all things Star Wars. Through styling outfits, sharing tips on collecting and other creative forms Jenmarie expresses her passion for the franchise on her blog, Anakin and His Angel.

6 Ways Funko Pops Turned Us All Into Collectors

July 3, 2018
« Previous post
Zwei: The Ilvard Insurrection is the best game you missed in 2018
Next post »
Is Kingdom Hearts Re:coded really that bad? 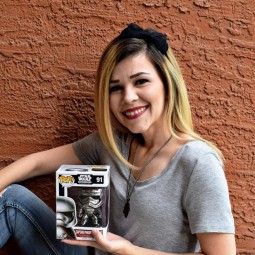 Jenmarie is a thirty-something bubbly geek girl who enjoys frequent trips to Disneyland and loves all things Star Wars. Through styling outfits, sharing tips on collecting and other creative forms Jenmarie expresses her passion for the franchise on her blog, Anakin and His Angel.