Frame by Frame: A Guide to Collecting Animation Production Art

Look for these 5 things when collecting production art.

This guest blog was contributed by Gemr curator Matt Sullivan, complete with items from his own collection. Check out all his amazing production art and more on his Gemr profile, @sullivanimation.

As an avid collector of animation production art, a common question that I hear is “What do you look for in a potential piece for your collection?”

Although it’s a complicated response, the short answer is that there are a lot of things I could be looking for in a piece. Every person is interested in art for different reasons, and each individual has a few “collecting morals” that govern their buying decisions. For some, it’s about nostalgia or historical provenance. Others may be focused on long term investments, a character they love, or any number of other things. Personally, I view my animation art collection as a curated body of work that paints a picture in my own mind of a certain iconicism that originally inspired me to become an animator in the first place.

All that being said, when it comes to original animation production art, there are definitely a handful of attributes that should at least be considered when you’re looking to buy.

Doing your research and understanding drawing as an art form will heavily influence your ability to differentiate between good and bad drawings, but there are specific characteristics related to production art that you can look for as well. Here are a handful of things that I try to keep in mind when assessing animation art.

There are many stages in the animation process, so it is crucial to understand what type of piece you are getting.

If you’re interested in drawings attributed to a certain animator, it’s important to know that the actual animator of a scene was only responsible for the rough drawings. The cleanup drawings would be done by a separate department, which means they would be completed by a different artist’s hand, just as the final ink & paint department would also be a different artist’s hand.

You can easily distinguish between these three stages of the process. Usually roughs are a much scratchier style of drawing with looser lines, commonly featuring timing charts or little annotations on the sides of the page. A cleanup drawing would have much tighter lines, and would likely have annotations on the drawing itself, sometimes with multiple colored pencil markings to inform the ink & paint artist about what colors are intended to go in what area. This is more common with drawings that have complex folds of fabric, where it may be unclear which part of the drawing is the inside of the garment (to be painted in shadow) or which is the outside (to be painted in light).

The final stage of the process is Ink & Paint, where drawings would be transferred onto clear celluloid or acetate by another artist who would draw the lines on the front, and reverse paint the color on the back side. Cels would be the very final tangible part of the process before the finished film, so if you’re looking for the piece of art that was actually shown on screen, that might be the one for you.

Having said that, each of these stages of a drawing can be considered an original, and there is a market for each. Choosing between them depends on your personal interests.

If you’re buying an original production drawing, it is incredibly important to verity that you’re receiving an original artwork. A certificate of authenticity from a credible source is the safest way to go, but if there is no certificate, there are a few features to look for that can help you determine if a drawing is genuine.

If you’re buying an older drawing, there will be a distinct discoloration to the paper that will likely give it a yellowed look. Hand-drawn animation was completed on peg bars, which allowed the animators to line up their frames accurately. It is important to look for the corresponding peg holes on the top or bottom of the paper. Since animators would flip and roll their drawings in order to see the characters moving, you will frequently see creases in the upper right and upper left (if the peg bar was on the bottom) and on the top and bottom, center of the page. Creasing that was part of the original production process does not devalue the artwork.

Cels age in a slightly different way. Over time, it is common to see rippling, which eventually warps the cel anywhere from slightly to significantly. Characters would occasionally be cut out of the celluloid sheet and pasted onto a background, but this is less desirable due to the eventual curling around the edges of the cutout and the general damage to the original cel sheet.

While choosing a piece of animation art for your collection (or any type of art for that matter), you should always consider the storytelling aspect.

Storytelling is arguably the most important trait of any piece of art across any medium. What is the character doing? What are they thinking? Why are they thinking that? All of these storytelling attributes compel the audience to care about what is happening, and they are built upon the 12 principles of animation. These 12 principles were originally coined by legendary Disney animators Frank Thomas and Ollie Johnston in their co-authored book The Illusion of Life, which is widely credited as “The Animation Bible.” Of these 12 pillars, I think the two that usually apply the most from the collecting standpoint are staging and appeal. You want the character’s pose to be clear and readable in a prominent part of the page, rather than off to one side or facing away from the camera.

An excellent storytelling pose can stand alone without any explanation or context. Generally, open eyes are more desirable, and you’d want your character to be in a “golden” storytelling pose rather than “in-between,” where they are transitioning from one pose to the next.

As far as I can tell, when it comes to animation art, most collectors tend to be searching for the most iconic scenes or characters (i.e. The spaghetti scene in Lady and the Tramp, or Mickey at the wheel of the ship in Steamboat Willie). Personally, I could go either way on this one.

Iconicism is the way to go for many pieces, but there are definitely instances where I am struck by the charm and appeal of a drawing from a seemingly unmemorable moment of a film. The nostalgia of a beautiful drawing or cel is a big factor for me, and I can easily override my instinct to pick a piece purely based on the importance of its scene.

Last but not least is the age old classic. Condition.

For some, this is more important than others, but I tend to be a stickler about this one. As previously mentioned, there are certain exceptions to be made when drawings have creases caused by the animation process or ripples caused from aging, but any types of folds, stains, scratches, rips, burns, dog slobbers, horrific smells, or any other similar forms of damage are usually a deal breaker for me.

Once you’ve unearthed the right piece for yourself and pulled the trigger on it, there is one final thing that you should try not to overlook. Display!

I consider display technique to be an important keystone to this entire experience. A lot of people end up with incredible pieces of history in their collection, but they’re placed in a cold dark corner of an attic somewhere to deteriorate. I think it’s important as animation art collectors that we not only show these pieces in all their glory, but we be responsible shepherds for any art within our care and preserve the artform. I don’t mean to shake fingers at anyone here, but taking good care of your art should be a priority if it isn’t already. Animators have poured their hearts and souls into this medium, and it’s important that we protect and document it for future generations.

Having said that, go get a frame that really highlights the features of your artwork. UV glass is a great way to protect from harmful sunlight, and a professionally matted drawing will really pop off the page. If you want to go for the museum-style approach, the framing process is a great opportunity to add a some information (scene description, character, artist, etc) to accompany the image.

As far as the Gemr platform is concerned, I’ve been tracking my art by displaying my collected items with descriptions to help me remember any details I have learned about the piece. I have also been attaching Youtube videos of scenes that the drawings can be attributed to, or any other relevant content that might be of interest for other collectors checking out my stuff.

I’m constantly posting new stuff, so come find me (@sullivanimation) in the Classic North American Animation club on Gemr, and show me some of your animation art!

Written by Matt Sullivan
Matt Sullivan is an Animator, Photographer, and Visual FX artist based out of the Greater Los Angeles area. His film credits include Frozen, Big Hero 6, Thor Ragnarok, Men In Black 3, Alice Through The Looking Glass, Oz The Great and Powerful and many more. He is an avid collector of original animation production drawings and other types of art. 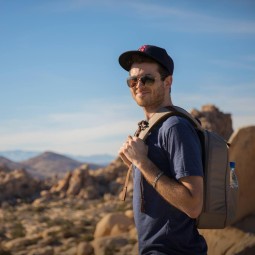 Matt Sullivan is an Animator, Photographer, and Visual FX artist based out of the Greater Los Angeles area. His film credits include Frozen, Big Hero 6, Thor Ragnarok, Men In Black 3, Alice Through The Looking Glass, Oz The Great and Powerful and many more. He is an avid collector of original animation production drawings and other types of art.