The Magic Lantern, or “The Lantern of Fear”

Did you know projecting an image only requires four common household items? It’s true, all it takes is:

The fundamentals of image projection have been known for thousands of years, possibly as far back as when primitive man entertained his family with hand shadow shows on cave walls. By 1646, a crafty Jesuit priest had designed a scheme to use a projected image to scare the pants off people, using a rudimentary Magic Lantern otherwise known as (dun dun dun) The Lantern of Fear. Though Magic Lanterns are not quite as popular today as they were centuries ago, their memory lives on thanks to the efforts of astute collectors with an eye for the unorthodox and unusual!

Welcome to Staff Picks: A closer look at the most awe-inspiring collectibles in the Gemr community.

Our latest staff pick is an early 20th Century Magic Lantern which uses 2 light bulbs as its light source.

Many people involved in the Magic Lantern’s development between 1400 and 1750 claimed to have invented it first, including Giovanni de la Fontana, Christiaan Huygens, Athanasius Kircher, Willems Gravesande, and Thomas Waldenstein. 2500 years ago, however, the Chinese were already capitalizing on image projection with their “Magic Mirrors” or “Light-Penetration Mirrors.” In 350 BCE, Aristotle discussed image projection, or Camera Obscura, in his Problems, Book XV. “Camera Obscura” is the term for a natural optical phenomenon which occurs when light reflected off a scene passes through a small hole in a wall (or other screen) and projects the scene’s image onto a surface opposite the hole.

While the Lantern’s magic perpetually mystified its audience throughout its lengthy development, a premier example of its role as the Lantern of Fear is exemplified in the mid 1600s by the devious Athanasius Kircher, a prolific scholar, author, and Jesuit priest. He painted frightening images of death, hellfire, and demons onto glass slides, and with the Lantern hidden under his cowl, he secretly projected the images onto the parchment windows of lapsed church members’ houses in the dead of night. His scheme was so effective, the story goes, that his services were always packed to the roof on the following Sundays. Kircher was certainly not the only one, however, who used the Lantern to instill fear.

By the late 18th Century, Gothic literature and related “fright novels” revealed Europe’s growing fascination with the macabre, the supernatural, and the thrill of being scared spitless. The Magic Lantern became the core tool in a showman’s bag of tricks; using translucent screens, smoke, sound effects, multiple wheeled lanterns, and assistants, “lantern showmen” put on terrifying performances that became known as “Phantasmagoria shows.”

While the core requirements in a Magic Lantern remained much the same throughout its history, technological innovations in optics and lens development drastically improved after 1825. The birth of photography, between 1825 and 1839, radically changed the impact of the images being projected. Lantern imagery – which had progressed from drawings on the side of the lantern to painted glass slides – now could deliver the “reality” portrayed by photographic images. This made Magic Lanterns a valuable teaching aid.

The rise of education, exposure to goods, and purchasing power in the middle class during the Victorian era, as well as the increasing availability of lanterns due to the Industrial Revolution’s mass production, all contributed to the huge number of Magic Lanterns available in the late 1800s. The discovery of electricity, and the development of the incandescent light bulb, even made it possible to manufacture simple lanterns as children’s toys. By 1895, there were an estimated 30,000-60,000 professional lantern showmen in the United States alone, who gave between 75,000 and 150,000 performances a year.

What began as merely a curiosity in its infancy became a trickster’s Lantern of Fear to drive church attendance, and the titillating allure of the Magic Lantern would continue to entertain until the last slides were produced in the 1940s. This fascinating invention is the direct forerunner to modern slide projectors, the film industry, and is to some extent, the progenitor of the modern horror film.

While the excitement of Halloween is still fresh in the air, Gemr collector sharonhistorical’s Electric Magic Lantern is a great reminder of the fun (and not so fun) frights shared by children and adults alike. Even if your collectibles are your personal treats, a longstanding tradition of tricking could be hiding in their history.

Should You Collect Homemade Collectibles?

Should You Collect Steelbook Cases? 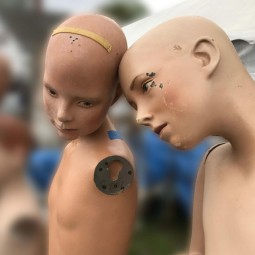